The story about Christmas

Christmas is celebrated on December 25 and is both a sacred religious holiday and a worldwide cultural and commercial phenomenon. For two millennia, people around the world have been observing it with traditions and practices that are both religious and secular in nature. Christians celebrate Christmas Day as the anniversary of the birth of Jesus of Nazareth, a spiritual leader whose teachings form the basis of their religion. Popular customs include exchanging gifts, decorating Christmas trees, attending church, sharing meals with family and friends and, of course, waiting for Santa Claus to arrive. December 25–Christmas Day–has been a federal holiday in the United States since 1870.

How Did Christmas Start?

The middle of winter has long been a time of celebration around the world. Centuries before the arrival of the man called Jesus, early Europeans celebrated light and birth in the darkest days of winter. Many peoples rejoiced during the winter solstice, when the worst of the winter was behind them and they could look forward to longer days and extended hours of sunlight.

Is Christmas Really the Day Jesus Was Born?

In the early years of Christianity, Easter was the main holiday; the birth of Jesus was not celebrated. In the fourth century, church officials decided to institute the birth of Jesus as a holiday. Unfortunately, the Bible does not mention date for his birth (a fact Puritans later pointed out in order to deny the legitimacy of the celebration). Although some evidence suggests that his birth may have occurred in the spring (why would shepherds be herding in the middle of winter?), Pope Julius I chose December 25. It is commonly believed that the church chose this date in an effort to adopt and absorb the traditions of the pagan Saturnalia festival. First called the Feast of the Nativity, the custom spread to Egypt by 432 and to England by the end of the sixth century.

It wasn’t until the 19th century that Americans began to embrace Christmas. Americans re-invented Christmas, and changed it from a raucous carnival holiday into a family-centered day of peace and nostalgia.

The early 19th century was a period of class conflict and turmoil. During this time, unemployment was high and gang rioting by the disenchanted classes often occurred during the Christmas season. In 1828, the New York city council instituted the city’s first police force in response to a Christmas riot. This catalyzed certain members of the upper classes to begin to change the way Christmas was celebrated in America.

In 1819, best-selling author Washington Irving wrote The Sketchbook of Geoffrey Crayon, gent., a series of stories about the celebration of Christmas in an English manor house. In Irving’s mind, Christmas should be a peaceful, warm-hearted holiday bringing groups together across lines of wealth or social status.

Also around this time, English author Charles Dickens created the classic holiday tale, A Christmas Carol. The story’s message-the importance of charity and good will towards all humankind-struck a powerful chord in the United States and England and showed members of Victorian society the benefits of celebrating the holiday.

As Americans began to embrace Christmas as a perfect family holiday, old customs were unearthed. People looked toward recent immigrants and Catholic and Episcopalian churches to see how the day should be celebrated. In the next 100 years, Americans built a Christmas tradition all their own that included pieces of many other customs, including decorating trees, sending holiday cards and gift-giving.

Santa Claus—otherwise known as Saint Nicholas or Kris Kringle— has a long history steeped in Christmas traditions. Today, he is thought of mainly as the jolly man in red who brings toys to good girls and boys on Christmas Eve, but his story stretches all the way back to the 3rd century, when Saint Nicholas walked the earth and became the patron saint of children. Find out more about the history of Santa Claus from his earliest origins to the shopping mall Santas of today, and discover how two New Yorkers–Clement Clark Moore and Thomas Nast–were major influences on the Santa Claus millions of children wait for each Christmas Eve. 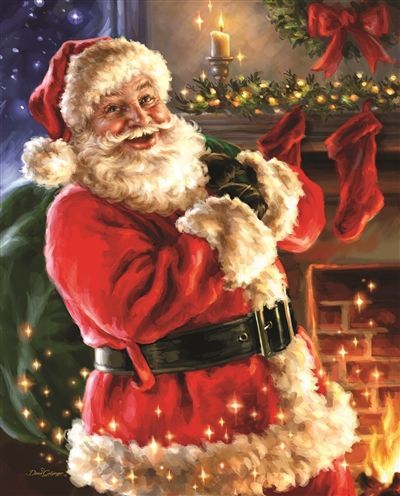 Christmas Traditions in the United States

In the United States, Santa Claus is often depicted as flying from his home to home on Christmas Eve to deliver toys to children. He flies on his magic sleigh led by his reindeer: Dasher, Dancer, Prancer, Vixen, Comet, Cupid, Donner, Blitzen, and the most famous reindeer of all, Rudolph. Santa enters each home through the chimney, which is why empty Christmas stockings—once empty socks, now often dedicated stockings made for the occasion—are “hung by the Chimney with care, in hopes that St. Nicholas soon would be there,” as Clement Clarke Moore wrote in his famous poem. Stockings can be filled with candy canes and other treats or small toys.

Santa Claus and his wife, Mrs. Claus, call the North Pole home, and children write letters to Santa and track Santa’s progress around the world on Christmas Eve. Children often leave cookies and milk for Santa and carrots for his reindeer on Christmas Eve. Santa Claus keeps a “naughty list” and a “nice list” to determine who deserves gifts on Christmas morning, and parents often invoke these lists as a way to ensure their children are on their best behavior.

Christmas was declared a federal holiday in the United States on June 26, 1870.

The first eggnog made in the United States was consumed in Captain John Smith’s 1607 Jamestown settlement.

Poinsettia plants are named after Joel R. Poinsett, an American minister to Mexico, who brought the red-and-green plant from Mexico to America in 1828.

Rudolph, “the most famous reindeer of all,” was the product of Robert L. May’s imagination in 1939. The copywriter wrote a poem about the reindeer to help lure customers into the Montgomery Ward department store.